The Ring of Freedom and Your Personality Type 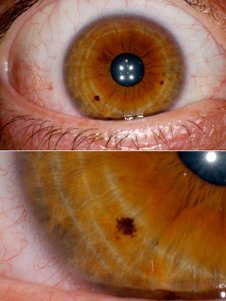 The Ring of Freedom and Your Personality Type as seen in Living Now Magazine
Friday, 01 April 2011 00:00

The Rayid model of iris diagnosis recognises that, throughout the ages, the eyes have been known as the windows to the soul. The iris is regarded as a beautiful and intricate blueprint of one’s personality. As a genetic map, the iris reveals detailed information about patterns you have inherited from your family, as well as how you communicate, relate and behave. Examination of the iris determines what personality traits and creative abilities an individual has acquired, what gifts they possess and the lessons they have to learn. We can also observe the specific support that person needs to achieve his or her maximum potential.

The iris is a powerful tool for unlocking the mystery of the personality, and those experiencing a consultation often say they feel as though they have been really seen for the first time. This article focuses on one increasingly common iris sign, the ‘Ring of Freedom’.

The Ring of Freedom, previously called the ring of accomplishment, was given its name by Denny Johnson, the founder of Rayid Iris. In classical or physical iridology, the pattern is known as nerve or stress rings.

According to Rayid Iridology, the greater the number of these freedom rings an individual has, the more restless they tend to feel. Those with this pattern often come across as impatient perfectionists. They dislike it if others are indecisive or procrastinate and have the tendency to disturb and dissolve what they perceive to be failing. Those with Rings of Freedom offer the world great gifts of action, change, creation, destruction and transformation. When feeling balanced, they possess the motivation to accomplish a lot: they get the job done.

Individuals with this sign often feel ‘driven’: as if they should be doing more. They carry an impulsiveness, the more rings they have the less able they are to control their cravings and urges. They can feel frustrated and confused as to what they should, or could be doing and it’s difficult for them to feel satisfied. Their intense energy needs to be released or transformed by being channelled into specific action.

Their chosen course of action depends a lot on other dominant characteristics. A close look at the iris can reveal much more about the individual personality, at a macro level we see four constitutional types. These are mental (jewel), feeling (flower), grounded (stream) and extremist (shaker) types (see chart below). The Ring of Freedom amplifies any of these four constitutional types. If, for example, an individual is predominantly the stable, grounded (stream iris) type, their energies may go into making their home a perfect place of eternal security. For these people, achieving improvements in their castle can ‘take the heat off’, making them feel at ease – at least for a while.

Similarly, if their underlying personality is extremist (a shaker iris pattern), they would feel the need to achieve success in more radical ways.

The iris has a vast amount of information that reveals your true nature and the lessons and gifts you have received from previous generations.

Combination types are more common than single types – so you may be described for example as a ‘shaker jewel’ or a ‘stream flower’.

Rayid – The Ring of Freedom

The Rings of Freedom typically manifest physical symptoms of nervous stress. Anxiety, irritability, difficulty relaxing and muscle tension are all common. The short moments of ease achieved are not enough to rest their nervous stress. This iris sign is not an indication of current stress in ones life: it is something that runs much deeper.

Freedom Rings indicate excessive reactions to sensory stimulation and being ‘on edge’. This is based on the unconscious fear: “if I do not achieve, I will not be worthy of receiving love.” The fear avoidance mechanism produces all the impulsiveness, restlessness, drive and activity.

Rayid Iridology holds that such patterns have genetic origins. With the Ring of Freedom, it is usually indicative of some deep-seated shame, ridicule and separation on the mother’s side of the family (specifically mother’s, mother’s mother). This creates the unconscious fear driving the person to achieve. There is often also friction between women on the mother’s side of the family, making it difficult to go yin (peace, grace, silence)

However, this ring is also associated with an absence of bonding and communication within this generation. The ring is often associated with family breakups, or the absence of regular love and kindness between parents, causing those with this pattern to deeply desire it now.

It is interesting to note that Rings of Freedom have become much more common in the last 40-50 years and is rarely seen in older generations. Perhaps this reflects the times of rapid change we are currently living in. Children with this structure are more likely to move beyond the limitations of preceding generations.

As people with freedom rings tend to be idealistic perfectionists, in relationships they may feel disappointed with their partner when things don’t live up to their expectations.

People with Freedom Rings need to find a place of grace, acceptance and stillness within. If this does not happen, they may be affected adversely, by suffering anxiety, insomnia or adrenal burnout. According to Rayid, the individual will benefit most from opening the heart to mother’s, mother’s mother. Due to the genetic link with this grandparent, it is important to imagine this woman embodying the characteristics required: grace and stillness.

The release of shame, ridicule and judgement are also important for those with Rings of Freedom. In meditation, prayer or affirmation programs we find the following brings a deep state of healing and a spiritual evolution:

Mother’s, mother’s mother being the embodiment of sweetness, grace, acceptance and love – the gatekeeper to your heart. Imagining her young, alive and in love, dissolves the negative memories stored within the DNA.
Gracefully receiving love, with the soft velvety texture of rose petals in the heart.
Finding constant non-judgement; releasing judgement of self and others.
Imagining an ocean of roses accepting all the rivers of the world regardless of how muddy the water is.
The effortless effort – feeling worthy of love without needing to prove anything.
Stopping to smell the roses.
Walking along the beach does wonders for their nervous systems.
Holding an image of an ocean of roses a metre behind your chest while performing daily tasks or communicating with your loved ones is another helpful exercise.

In addition, those with Rings of Freedom also benefit from nervous support, in the form of magnesium, relaxing nervine herbal tinctures and teas such as oats, St. Johns Wort, scullcap, valerian and passion flower. Relaxing essential oils such as rose, lavender, geranium, patchouli and ylang ylang used in massage or baths are also of great benefit.

Ultimately, however, for those with Rings of Freedom, meditation is seen to be the most effective means of balancing the many positive traits they possess with their more negative manifestations. If people with rings of freedom have a daily practice of integrating their opposite (grace, acceptance and receiving love) for 20 minutes they can bring a higher vibration of wonderful change to the world without falling into anxiety or tension headaches or the need for endless doses of magnesium. Rayid therapies such as prayer, affirmation and meditation are used to bring health and happiness to the individual, send forth light and love to future generations and are making the world a much more beautiful place.